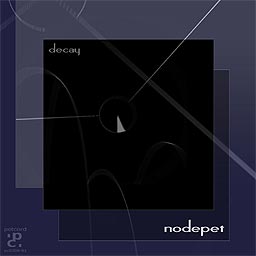 Nodepet's third release Decay presents the paradox of increasing complexity by means of reducing musical themes and a leaner production. Compared to previous works Decay is not a compilation of randomly selected tracks but four related pieces of a whole that provide different perspectives of a common thread. It could be about life or about everything else the listener can associate with it.

At first the release starts with friendly ninth chord, but then loses momentum and is swallowed by waves of dissonances eventually leading to unexpected chord alterations. This quick successsion of swinging moods is interspersed by passages of low frequency drones. Following the the flow of memorised past events sketchy conclusions are derived like echoing footsteps of a restless thought roaming through empty streets. Indecisive between giving in to expectations and agressive rebellion a sinister tension is accompanying the gloomy mood of a troubled life.

Contrary to what the titles may suggest, Decay is not meant to carry a story. It is still the music itself that is the message, which is emphasised by the fact that the titles of each track were added after the compositions had been completed. As a whole, Decay is a more polished and accomplished effort than its predecessors in that it addresses contradictions and inconsistencies without making compromises to the music itself.